Edgar has turned it in after 36 races around the oval.  He is still new here at AFG and we are getting to know him a little bit better.  Edgar has recently graduated from The Greyhound Inmate Experience and has earned his Good Canine Citizen Certificate.  Could this handsome doll face be the one for you?

Edgar has been quite the character in our house. He’s a very sweet boy, and generally is quiet and laid back. He enjoys being in the same room with you, but doesn’t have to be in your face all the time. Given the opportunity he is happy to give you kisses and lay his head on you every now and then. He is a very confident boy and is eager to explore. There are times out in the yard where he can be fairly stubborn in coming when called. When he focuses on something, whether visually or hearing something he’s unsure of, he stays focused until he’s figured it out. Click training him would probably be a good course of action, especially if he learns food is involved. His appetite is something to behold. He is happy to show off his commands at the drop of a hat if he knows food is a reward. We know greyhounds can be seriously food motivated, but Edgar takes it to an entirely new level. If you wanted to train him to steal the Declaration of Independence from the National Archives you could probably train him to do so (note: Allies for Greyhound does not recommend trying to teach your dog to steal the Declaration of Independence from the National Archives). Edgar has also proven to be quite the coffee connoisseur, so invest in tumblers with lids or learn to never turn your back on a cup.

All in all, Edgar has been a lot of fun to have in our house. We’re still getting to know him better, but was easy to figure out early on that he’s got a good heart. He’s a big handsome guy, and will make for a very entertaining addition to a family. 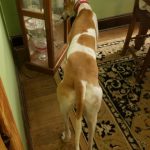 Bree has turned her locker key after 34 bursting races at Iowa Greyhound Park and the famous oval of Southland in West Memphis.  Her mom, Kiowa Basket found a home through AFG as well!  She is still new to us…